Mountain and Sea. Beauty all around.

The perfect symbiosis of the 4 elements originates the 5th - BALANCE!

Pico's Mountain is not only the highest point in Portugal, but it is also the 3rd largest volcano in the Atlantic Ocean; the "Gruta das Torres", is the largest lava tube in Portugal; The Landscape of the Pico Island Vineyard Culture is a Unesco World Heritage Site, the highest international award that that entity attributes to the monuments and sites throughout the world. Its incomparable beauty won the title of one of the Seven Natural Wonders of Portugal - the Volcanic Landscape of Pico Island embraces the whole island.

Pico has some of the best places for swimming in the Azores, with frequent temporary appearance of sandy areas in its beautiful bays. It is also the ideal island for walking, running, bird watching, fishing, biking and Moto 4. Also possible, caving is a favourite hobby for many visitors.

This is a calm and peaceful place, that also offers the visitor the possibility to participate and try, in a nearby town, the busiest life style of the island and to learn the most festive elements of its culture , particularly the famous "baile" (traditional dancing) "Chamarrita" centuries-old tradition that expresses the popular culture of Pico and its people. 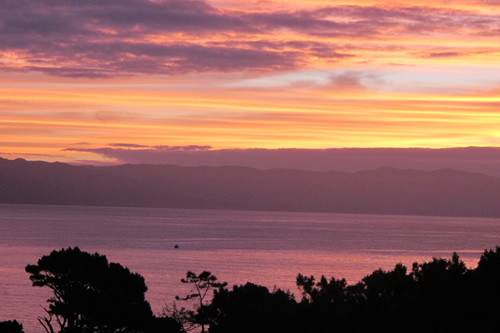 Discovered in 1427, the island of Pico, is located in the central group of the Azorean archipelago. It has got an area of 447 km²; a coastline with 151.84 km in length; 42 km long and 20 km wide. It stands out for its size and for its majestic mountain, Pico Mountain, which culminates in a conic peak, Pico Pequeno or Piquinho, located on the western end of the island. It is the highest mountain in Portugal and the third largest mountain emerging from the Atlantic, reaching 2351 meters above the sea level. Its soils are mostly made up by recent basalt: the so-called "mistérios" or "biscoitos". 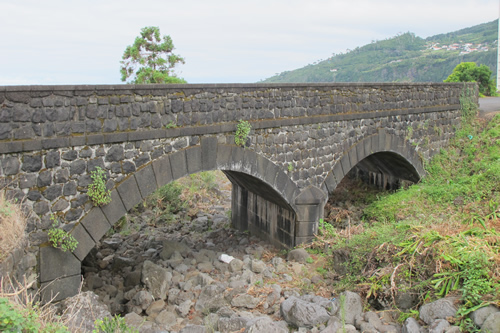 Its settlement started by the 1480s, and the first settlers were from Flemish origin. The island received people from different social groups, particularly, aristocrats, distinguished by their lifestyle and the possession of land; a high presence of the secular and regular clergy, mainly the Franciscans; and a third group, formed by merchants, peasants and artisans.

In the mid-sixteenth century, specifically in 1542, arises the village of São Roque do Pico, which after being elevated to municipality, comprises the parishes of Santo Amaro, Prainha, São Roque, Santo Antonio and Santa Luzia, developed more and more, though, it has always been the least populated. 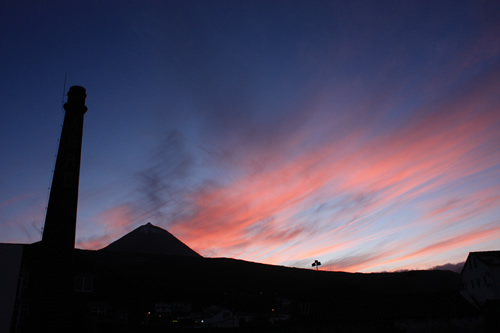 The economy of Pico results from the topographic and climatic characteristics of the island. This is the reason for the substancial production conditioned by the island's geographical diversity and documented in many historical periods. In addition to agriculture, livestock and fishery, the island's economy ever since the beginning of the settlement, has been marked by the cultivation of vineyards and wine production. First, featured the production and trade in wine. Introduced on the island in the late fifteenth century, the vineyards found a welcoming space within the "currais" of volcanic rock and wine production reached the highest values in the eighteenth and nineteenth centuries. During this period, Pico's wine was appreciated in the region, being exported to São Miguel and Terceira. But it was in the international market that we've found the main consumers, not only for the wine but also for Pico's spirit. The wine was mainly exported to the British colonies in North America and Pico's spirit for Brazil. The success of the production and subsequent commercialization of Pico's wine was reduced, however, from 1852, when the "oidium" attacked the vineyards. The consequences of this disease caused a long slump in the production of Pico's wine and only very recently there are signs of the commercial production's recovery.

However, the island's economy is not limited to exploitation of its volcanic soils. On the one hand, the existence of numerous bushes in various areas of the island contributed to the trade in timber and coal, though still limited to the regional market. On the other hand, the livestock, has become an important activity, since the discovery of the island.

In the nineteenth century a more effective maritime activity, was possible by the introduction of whaling. This was the first step to create the image of Pico's whaler, a typical traditional characteristic of Pico' Island. 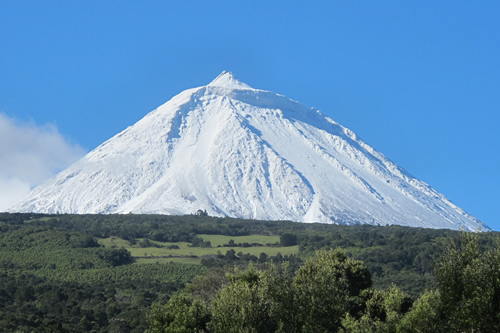 The climate in the island of Pico is oceanic temperated and it is characterized by mild temperatures (with small annual windchill amplitudes), regular rainfall throughout the year, high relative humidity, cloudy sky and frequent winds. Concerning the monthly rainfall distribution, the most significant precipitation occurs generally during the winter season from late September to the end of March, about 75% of the annual precipitation. Although with a drier climate, Pico is influenced by the Gulf Stream. The Azores Anticyclone functions as a restraining force, while maintaining the temperature between 14ºC (57ºF) and 27 ° C (80 ° F) throughout the year.

The geographical position of the Azorean islands, in the global context of atmospheric and oceanic and circulation, affects the climate of the archipelago. Atmospheric circulation is controlled by the Azores anticyclone, which position, intensity, development and orientation influences the weather conditions experienced in the archipelago. With regard to temperature, it varies regularly throughout the year, being the highest values registered in July and August (Temp. 22 ° C-23 ° C) and the lowest in January and February (Average Temp. 13ºC-14ºC). The annual average temperature is 17,4ºC and the temperature changing rate with altitude is -0,6ºC / 100 m. The prevailing winds on the island are from SW, although in the months from October to December winds of South are more common, and in from May to July there is a predominance of NE winds. According to data provided by the NIMG (National Institute of Meteorology and Geophysics), and measured at Picos Aerodrome the average monthly speeds ranges from 11.4 km / h (in July) and 20.9 km / h (in January). The highest values of average speeds, in turn, is achieved with SW winds (28,3 km / h and 27.4 km / h in December and February, respectively) and NW winds (27.3 km / h in January).

The Laurissilva Forest, relic of what remains from the vegetation that dates back to the Tertiary Age which disappeared in almost the entire European continent due to glaciations, is, fortunately, possible to be found in isolated areas in every islands being the most significant located in the Central Plateau of Picos island. The main endemic forest species include Azores [...] juniper, Erica azorica, Azores Laurel, Azorean Holly, Azores Blueberry, Boxwood, [...]and Picconia azorica.To enhance the special charm of the island there are some flowers such as hydrangeas, camellias or azaleas, plants used as natural fences around the properties. The acacia and the cryptomeria, larger trees, have also been introduced on the island and have gained large commercial importance.

The sea in Azores is home to several cetacean species, being the most common the sperm whales, beaked whales and dolphins. Some shark species, ranging from the small dwarf shark to the Whale Shark are also registered too. The swordfish, tuna, Atlantic bonito, eel and mackerel can be found. In coastal areas, there are often octopus, sea urchins, sea starfish, lapas and cracas.

As for land animals, the wild rabbit, ferret-dwarf, the ferret and the hedgehog are common mammals. It is noteworthy that the bat of the Azores is the only endemic land mammal of the archipelago. Cows are features of the Azorean everyday landscape, providing a livelihood for many families. 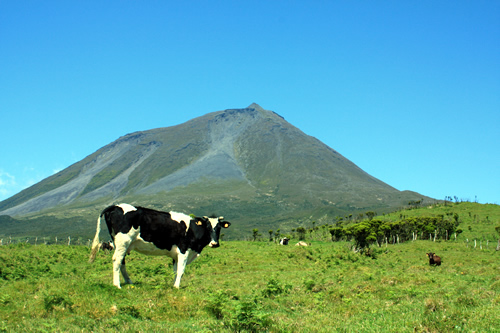 The cuisine of the island is very rich and it is primarily based on the freshness of products withdrawn from the sea and picked from the soil. Crustaceans such as lobster, the cavaco and the crab, clams as lapas and cracas, squid and octopus are the basis for varied and rich dishes. Among the best fish species, there are hake, mackerel, moray, veja (similar to cod), theirio, the salema, the white grouper, grouper, and the swordfish.

The beef and pork meat are present in the regional cuisine as "molha de carne à moda do Pico, "torresmos", "sausages" and "morcela". These very typical and traditional dishes are accompanied by verdelho wine, Picos red wine or others locally produced. For dairy products there are the famous cheeses from São João and Arrife, both produced from cow's milk.

Sweet rice, sweet bread and pretzels are among Picos most famous delicacies. Worldwide known digestive the bagaço from Pico, and spirits distilled from figs, as well as a wide range of liquors from mulberry, meddler or "angelica".

We arent pioneers in the activity, we are rather in HOSPITALITY!

We are a genuine and innovative familiar enterprise, offering holiday houses for tourism, in absolute contact with Nature. We provide our clients with a personalized, unique, professional, honest and complete follow-up service, ever since the first contact.

Our houses, built with passion, combine modernity and ancestry in its architecture, decoration and comfort, to offer our customers unique and memorable vacation experiences in contact with nature and with the culture of a brave and honourable people.